In honor of Armistice Day / Remembrance Day / Veterans Day, I’ve created a commemorative compilation poem from the words of The Army’s Poets*.  I selected these poems, verses and excerpts from The Stars and Stripes newspaper, published in France by the American Expeditionary Forces of the United States Army from February 8, 1918 to June 13, 1919. 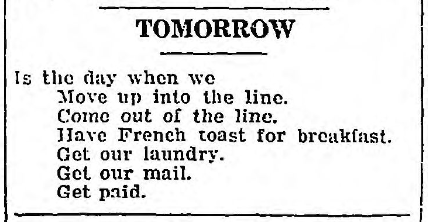 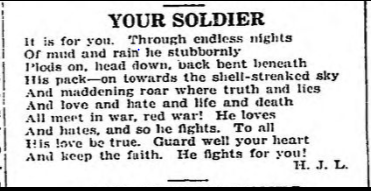 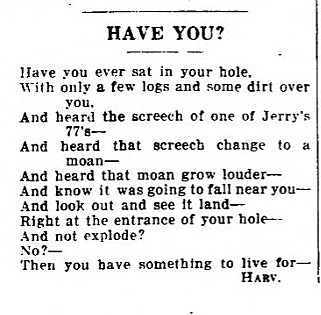 In Flanders fields the poppies blow
Between the crosses, row on row,
That mark our place; and in the sky
The larks, still bravely singing, fly
Scarce heard amid the guns below.

We are the Dead.  Short days ago
We lived, felt dawn, saw sunset glow,
Loved and were loved, and now we lie
In Flanders fields.

Take up our quarrel with the foe:
To you from failing hands we throw
The torch; be yours to hold it high.
If ye break faith with us who die
We shall not sleep, though poppies grow
In Flanders fields.

_________
* The Stars and Stripes newspaper featured soldier-authored material.  “The Army’s Poets” column appeared May 3, 1918 and became the newspaper’s most widely read column.  Soldiers submitted more than seventy-five thousand poems and many not selected for publication by The Stars and Stripes were published after the war.

For more information see Library of Congress Collection:  Stars and Stripes: The American Soldiers’ Newspaper of World War I, 1918 to 1919.

24 thoughts on “We Remember”

What do you think? Cancel reply

Looking for Hank the Hedghog?